An NI 43-101 technical report estimated inferred mineral resource (at a 0.25 g/t gold equivalent cut-off grade) of 11.5M tonnes at an average grade of 0.495 g/t gold and 4.3 g/t silver that would be amenable to open pit extraction methods.” The technical report supports the Company’s plan to initiate production through the construction of a Heap Leach Mining Operation (“HLMO”) at Cerro Caliche. To advance the HLMO, the Company has entered into Memorandums of Understanding with three China-based EPC companies for the HLMO’s finance and development. Because there can be no assured date as to when COVID related restrictions will be lifted, Sonoro is also investigating an alternative plan to advance its proposed HLMO with Mexican technical expertise, with the intent of eliminating the impact of future COVID-19 related travel restrictions. Additional information on the alternative plan will be announced in due course.

Until Spring of this year Sonoro’s principle focus was the property’s shallow bulk tonnage potential in terms of both exploration and developing the HLMO. Results from drilling and field work has outlined a shallow oxide gold exploration target of between 75,000,000 to 100,000,000 tonnes with grades potentially between 0.3 g/t to 0.5 g/t AuEq., which is net after factoring in an assumed 70% gold recovery rate. It is important to emphasize that these potential tonnages and grades quantifying the exploration target are conceptual in nature and until enough drilling occurs, the existence, if at all, of a mineral resource cannot be assured. Also please note that the targeted bulk tonnage potential estimates are separate from the inferred mineral resources stated in the NI 43-101 technical report.

During late winter and early Spring 2020, an in-company analysis of the company’s entire geological data-set outlined Cerro Caliche’s elevated potential to host high-grade gold. i On May 26th, 2020 Sonoro released the Cerro Caliche Project Development Report which summarizes the study and its conclusions. As detailed in the report, an analysis of high grade chip samples taken by the Company, over an area of 4 kms by 3 kms, noted their near ubiquitous occurrence and elevation which is restricted principally to elevations between 1,100 meters above sea level (masl) to almost 1,700 masl. The high-grade samples ranged from 4 g/t to 25 g/t gold with a high of 95 g/t.

Based on the conclusions of the report and subsequent work to define specific drill targets, the 2020 High Grade (core) Drilling Program was planned. The Company has identified an initial 20 high-grade gold targets and an initial 6,000-meter core drill program to test them is currently underway. The campaign targets where veins and veinlets mapped at surface are projected to coalesce into one or two veins within the epithermal system’s ideal boiling zone.

The core campaign, together with reverse circulation (“RC”) drilling to test the property’s shallow bulk tonnage potential and the resumption of the HLMO scoping study commenced following the August 12th, 2020 completion of a CAD $8,000,000 equity financing, which included a fully subscribed 60% over allotment.

The Cerro Caliche gold project is strategically situated between two world-class mining districts of the Sierra Madre Gold Belt and the Sonora-Mojave Mega-shear. Located approximately 45 kilometers from the town of Magdalena de Kino in the mining district of Cucurpe, the property covers approximately 1,400 hectares and is surrounded by several gold-silver mining operations including the Magna Gold Corp’s San Francisco mine, Premier Gold’s Mercedes mine, Goldgroup’s Cerro Prieto mine and Agnico Eagle’s recently-acquired Santa Gertrudis project. 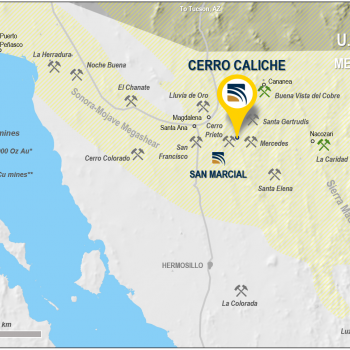 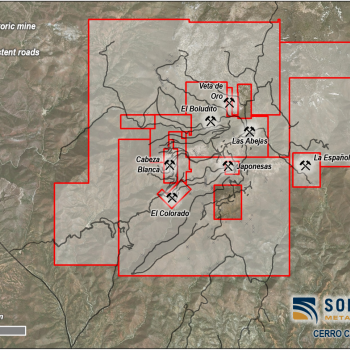 Mineralization types throughout the Cucurpe mining district include variants of epithermal low sulfidation veins and related mineralized dikes and associated volcanic domes. Local altered felsic dikes cut the mineralized meta-sedimentary rock units and may be associated with mineralization both in the dikes and meta-sedimentary rocks. The district has historically been regarded as vein dominated, but recently, open pit mining operations have been developed on disseminated and stockwork style gold mineralization.

Host rocks include Jurassic-Cretaceous meta-sedimentary rock units including argillite, shale, quartzite, limestone, quartz pebble conglomerate and andesite. Younger intrusive rock consisting of medium coarse-grained granodiorite-granite is present in the westerly parts of the concessions near the historic Cabeza Blanca mine. It is apparent that veining cuts and pervasively alters the intrusive stock. Rhyolite occurs in irregular bodies distributed in higher elevations in the northerly part of the concession, including the Rincón area, where it occurs as flows, sills, dikes and rhyolite domes. Part of the rhyolite is mineralized and appears to be related to epithermal gold mineralization throughout the property.

The nearby Mercedes mine complex area is interpreted to be part of the same hydrothermal event as the Cerro Caliche hydrothermal event as both are associated with development of extensional structural regional events in Tertiary age around 30 Ma to 35 Ma. Regionally, low temperature gold-silver fluids moved upward from a broad underlying area of emplaced calc-alkaline magma stock, through steep extensional (open) structures that tapped and channeled the fluids that deposited precious metals in quartz vein deposition sites in the Sierra Madre’s epithermal mineralized districts. The “boiling phase” changes kinetics within 1,000 meters of the paleosurface (the surface as it existed during the Tertiary) and defines the zones of deposition for the precious and base metals within the veins.

Sonoro Gold’s exploration conducted in the project area has defined a near surface resource posted to SEDAR which is a maiden resource which both initiates the Company’s program to quantify large areas of mineralized material that could support a conceptual Heap Leach Mining Operation. Continuation of drilling is projected to extend the mineralization in structural zones along trend and near surface. This completed work, combined with the completion of a working mineralization model, has developed excellent targets for high grade gold veins.

The goal of future exploration at Cerro Caliche is to increase the size of the numerous precious metal mineralized zones by focusing on three different mineralization formats:

Future phases of drilling totaling approximately 50,000 meters planned for 2020-21 are designed to test the exploration target of between 75,000,000 to 100,000,000 tonnes with grades potentially between 0.3 g/t to 0.5 g/t AuEqR, assuming AuEqR = (Au g/t × 0.72) + (Ag g/t × 0.01133 × 0.30). The potential tonnages and grades set forth in the analysis of geological potential are conceptual in nature, as there has been insufficient exploration to define a mineral resource and it is uncertain if further exploration will result in the target being delineated as a mineral resource. Potential estimates are separate from the inferred mineral resources stated above.

Drilling will target both infill in zones that were previously drilled as well as a large number of holes to test undrilled portions of the various mineralized trends along strike and at depth.

The main purpose of the 2020 core drilling program is to test for the presence of high-grade type gold mineralization as outlined in the PDR. The PDR, which delineated the potential for higher grade gold zones in the epithermal system, was disseminated to the public by the Company on May 25th, 2020 and is available here.

As illustrated in the Drilling Plan, the proposed 6,000 meters of core drilling will target mineralized zones projected to support vein zone coalescences at elevations favorable for the deposition of high-grade gold. Drilling will test the confluence of parallel striking gold bearing vein zones that, at surface, are expressed as gold enriched sheeted vein sets. It will also similarly test at depth, the area’s coalescing of gold enriched stockwork zones. An additional focus is on areas where the rock type changes from quartzite to Cretaceous andesite host rock.

All scientific or technical information contained on this website has been reviewed and approved by Stephen Kenwood, P.Geo., a Director of Sonoro Metals Corp., who is a “Qualified Person” as defined in National Instrument 43-101 of the Canadian Securities Administrators.

By providing your e-mail address, you are consenting to receive press releases, quarterly and annual reports, presentations and other information concerning Sonoro Gold Corp. and its affiliates and partners.